It’s a game of soccer. We love it 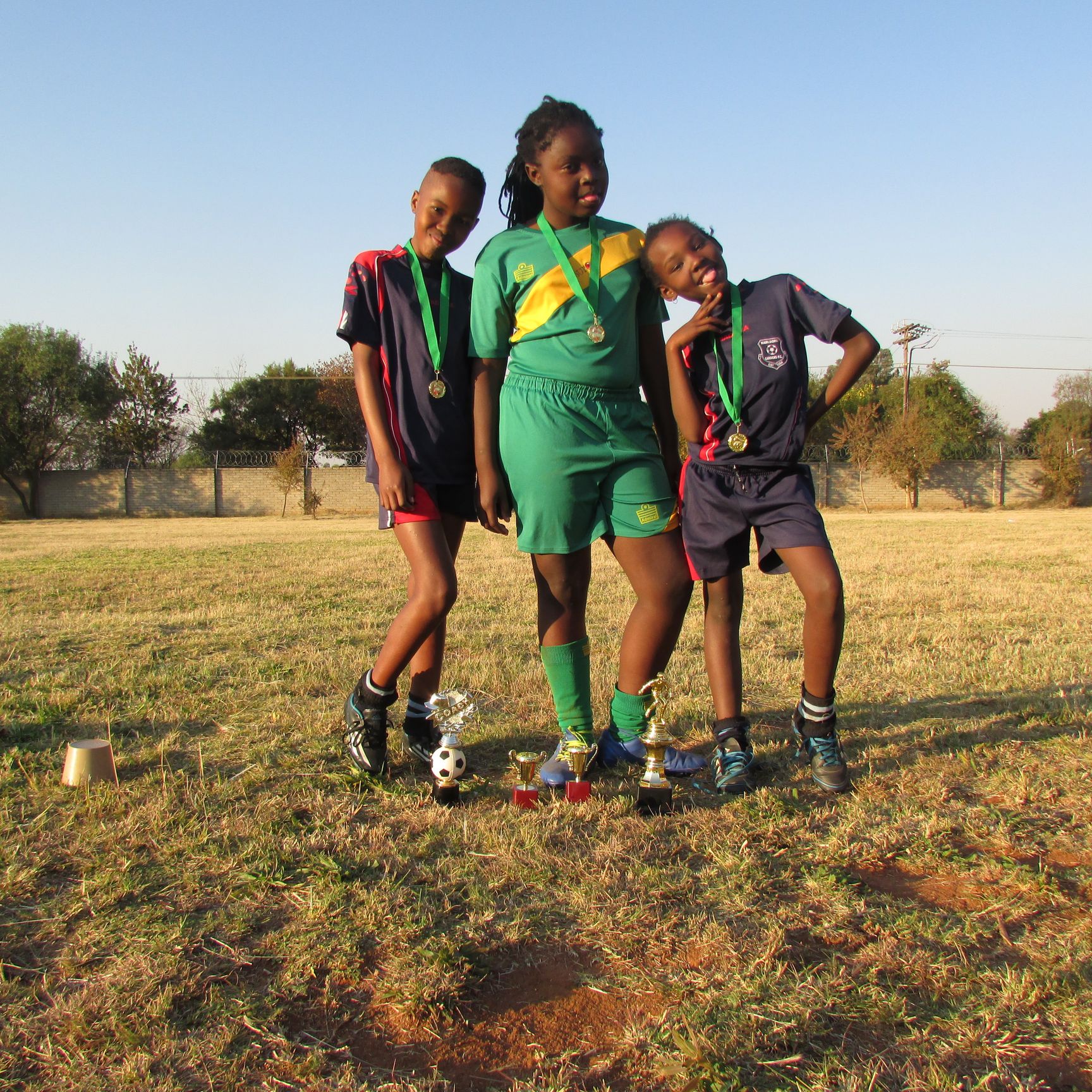 Three girls who play for the champions, Nkulisa Football Club

On 3 June 2017, first Saturday of the youth month – New Jerusalem Children’s Home opened its gates and welcomed 9 soccer teams. Teams of children under the age of 9 and one’s under the age of 12. Teams of dedicated children and youth who walked between gates of New Jerusalem Children’s Home, with an aim and one aim only, the aim being to play soccer. To share and enjoy the first weekend of the youth month, doing what they love most and what they do best, irrespective of who go home with a trophy and or named a winner/champion of the second 2017 Midrand Soccer Tournament.

Children and youth, from the greater Midrand come out in their numbers, walking through gates of New Jerusalem Children’s Home, with joy and endless smiles as they greet each other as friends and as people with common life interest and same passion, this being soccer, therefore named – young people passionate about soccer. The home opened its soccer fields with the under 9 teams, young people showing each other their born with talents, gaols hitting the net and one team being made the champions, this came after a great amount of soccer skills from children and youth of the home and those from the communities. New Jerusalem Children’s Home soccer team getting a beating on the Sami-finals in both the under 9 and under 12 soccer games.

New Jerusalem Children’s Home Football Club, joined the crowed and enjoyed football from the outside of their soccer pitch. Winners of the tournament being Nkulisa Football Club from Ebony Park in both under 9 and under 12 games. Nkulisa FC under 9 team, showed Super Gauteng Football Club flames, giving them and taking the tournament with 2 lashes over nothing (2 – 0) goals. The under 12 had it hard, with endless defence and attacked by the skilled boys from Alexandra township – Mox Football Club gave Nkulisa a race before the last whistle blow, which lead to the penalties. An interesting part of children on the soccer pitch, during this time Nkulisa got away with a 1 – 0 score, making them winners and champions of the under 12 champions of the winter soccer tournament.

New Jerusalem Children’s Home has always opened its doors for communities’ to share the best they have with their children. Our children belong to this very same communities, it is best that we make available our soccer pitch for all those who come with good intentions, those who come to share their passion with our children, to awaken our children’s hidden talents. This is one of the ways of allowing social cohesion and community interaction on a child’s interest – said Paul Muduma, New Jerusalem Children’s Home Accountant and Soccer Coach.

One might ask – what is that one different thing this soccer tournament have, which other soccer tournament do not have? Well there is no much of a difference, but a true game changer, the developing world has asked that women must be included and be given an equal opportunity to take part in both social and economic activities men find themselves doing, not only should the given an opportunity but they should do it jointly with men. The tournaments, has seen five girls of New Jerusalem Children’s Home under 9 team, play together with boys, on the same soccer pitch in the same team. Nkulisa, champions of the day, had three girls. Two in the under 9 and one playing together with the under 12. This alone tells that not only do we play soccer, we try to be relevant with need of the hour, our sister’s passion can not only be expressed from the outside line – with us it will be seen on the soccer filed with their brothers.

we invite all men and women to take part in our sporting events, please invite our netball team, let our soccer team come out to you or come to us and lets share our talent, all we wish to see is our children knowing that they have you and you have them, the cohesion between us and doing away with them and us.

← Open Invitation
How far are we? →