Posted on September 14, 2015 by Emmanuel Shoroma 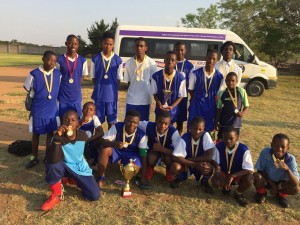 It was wild celebration and smiles all around as the New Jerusalem children’s home boys defeated their longtime rivals Glen Austin High Boys Soccer Team to claim the top spot of the NJ FOUNDERS CUP. After a heavy fought battle of a match with emotions reaching peak levels and hopes hanging by a thread, Jermaine Masemola who attends Glen Austin High but decided to represent where his heart trulyis ‘New Jerusalem’ was able to score the solo game deciding goal of the match.

A lot of hype and expectation had been created around this game given the nature of the tournament. The NJ FOUNDERS CUP is the first of its kind, a yearly tournament dedicated to the Founders of New Jerusalem Children’s Home. This was envisaged as a way in which NJCH can get its name out there in terms of sports promotion and youth development through sport.

We would like to congratulate all the boys of the NJCH Boys Soccer Team for the great achievement and also like to that the Glen Austin High Team who proved to be such great competitors for making such a beautiful game of soccer possible. Well-done Boys!!!

← Arbor Day Meets NJCH Peace Garden!
What can you do with R20 in a month? →