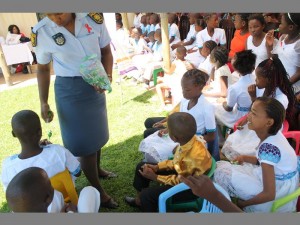 Although the event was hosted at New Jerusalem Children’s home, the girls of Miriam Makeba’s home for girls were also present.

On 1 December, the police were joined by the Department of Social Development and Health in an effort to impart knowledge about keeping safe and staying HIV free.

Station commander Colonel Steven Moodley was clear with his message. “Constitutional court judge, Edwin Cameron revealed his status many years ago to South Africa in an attempt to lessen the stigma attached to the virus,” he said.

He also took the opportunity to warn the youngsters of risky behaviour. “Last year, the police were sent on a search to look for a young girl who had run away, only to find her dead body days later.

“The purpose of today is to increase awareness for the disease, however we urge youngsters to stop engaging in behaviour that risks their lives in every way,” he said.

Celani Hlatshwayo of the social development department encouraged abstinence. “We cannot in good conscience say that it is okay for you to have sex, therefore I plead with you all to abstain, as you are young,” she said.Sister

Liya Rumudi from the department of health was more pragmatic in her approach, “You are all children now, however you will develop into young adults and seeing as knowledge is power, we shall give you knowledge to use, hopefully, at a later stage in your lives.”

She added that a safe sexually-active lifestyle included using condoms and being faithful to one partner.

After the speakers shared their words of wisdom, a candle was lit in honour of all those that have died of HIV and Aids, and related illnesses.

The educational day ended with constables Nanty Belebesi and Matome Tlamela handing out sweets and cool drinks to the children.