Our girls at Oprah Winfrey

One of the most important question we always get from you on your visit to the home is “what school do your children go to” and our answer has always been schools within our nearby communities and special school in Pretoria. 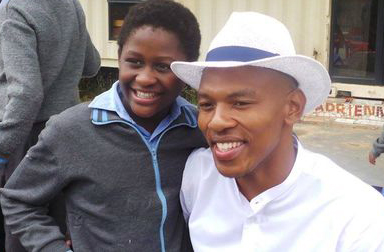 New Jerusalem Children’s Home is hoping to change how it has been answering your question, on the 30th April two of our girl child went for test assessment at Oprah Winfrey Leadership Academy for Girls. Doors which we are hoping to see our girls enter into and their lives transformed to the betterand to be economic role players
when coming out through the attained education given between its walls. The selected girl’s child from our organisation are one of the best academically performing children which we applied forduring the open call by the school for children to apply, which we took a step and applied for and they were called for assessments.

As an organisation we are hoping to have our children attending Oprah Winfrey Leadership Academy for Girls; applying for them earlier on in February 2016 and driving them on the early hours of 30 April 2016 to the school for the interview is our way of giving them the best education desired and for them to build their lives, our believe in this exercise is to let them, Acisha Mentjies and Minalda Sithole, to see and hold on to being the best they are meant to be.

The girls; smartly dressed and ready for the day, Minalda wearing her Ebony Park Primary School – grey and powder blue uniform, while her sister – Acisha was in her navy and white from Dulcie September in Rabie Ridge. As an organisation we thought our girls are going for an interview at Oprah Winfrey Leadership Academy for Girls to represent their schools, therefore we believed they should assemble themselves in school uniform to represent schools they come from and to show their pride in wearing a school uniform and creating impression of how well they will put on Oprah Winfrey Leadership Academy for Girls school uniform in the future, said Mme Nana Pheto – Centre Manager

Minalda was anxious at the math’s paper as time caught-up with her she said “am happy I walked the corridors of Oprah Winfrey Leadership Academy for Girls, I wish to put my math doubts behind me and be positive of the outcomes and to remain focused on my future as an aircraft pilot” Acisha on the other hand, smiling and looking happy than before supported her wish of being a Master of Business Administrator and she added with giggly words “I want to get my mother and siblings, out of the situation they live in at present through education from this school” (Oprah Winfrey Leadership Academy for Girls) saying this words as she look at the corridors she came from. Looking at the centre manager, she smiled and continued “people here are nice and I will play my part”

We are now anxiously waiting for June, which is when we will get to know how the girls did. New Jerusalem Children’s Home wish to champion rights of children not only in providing residential facilities for its children and youth but to continually build on their educational needs and to expose them to all educational opportunities.

As organisation we would like to invite all communities and corporate communities to sponsor a child/youth in education. We welcome all men and women to finance a child’s education in a school of choice through the organizations ‘sponsor a child’ drive.

← Flying our flags at Wits
Do you remember? →